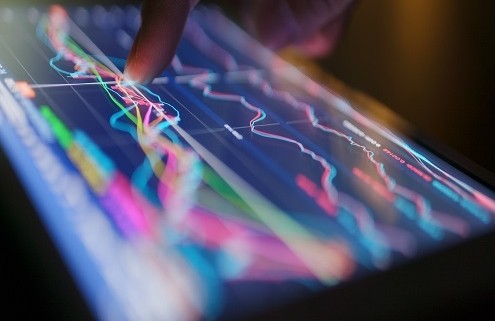 When these types of candlesticks appear on a chart, they can signal potential market reversals.

The Hammer and Hanging Man look exactly alike but have totally different meanings depending on past price action. 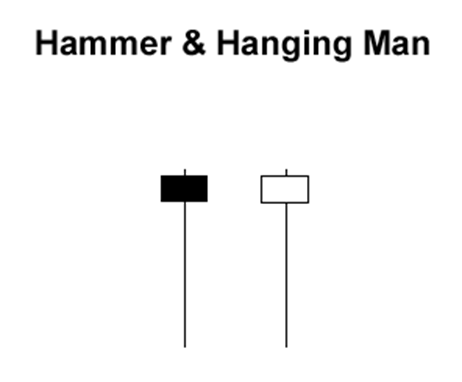 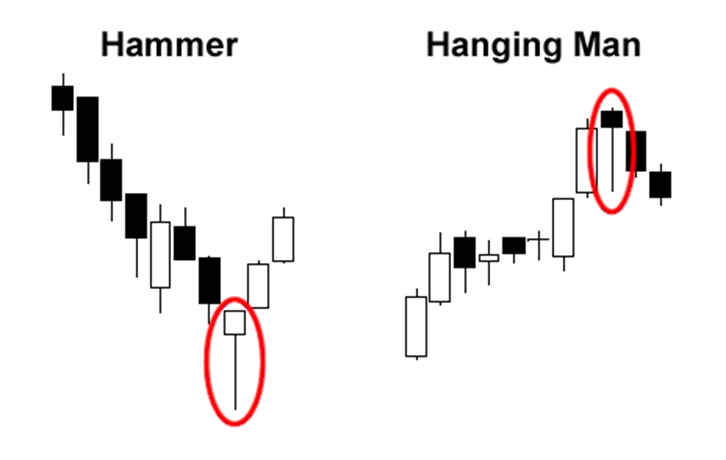 The Hammer is a bullish reversal pattern that forms during a downtrend. It is named because the market is hammering out a bottom.

When the price is falling, hammers signal that the bottom is near and the price will start rising again.

The long lower shadow indicates that sellers pushed prices lower, but buyers were able to overcome this selling pressure and closed near the open.

Just because you see a hammer form in a downtrend doesn’t mean you automatically place a buy order! More bullish confirmation is needed before it’s safe to pull the trigger.

A typical example of confirmation would be to wait for a white candlestick to close above the open to the right side of the Hammer.

Recognition Criteria for a Hammer:

The Hanging Man is a bearish reversal pattern that can also mark a top or strong resistance level.

When the price is rising, the formation of a Hanging Man indicates that sellers are beginning to outnumber buyers.

The long lower shadow shows that sellers pushed prices lower during the session.

Buyers were able to push the price back up some but only near the open.

This should set off alarms since this tells us that there are no buyers left to provide the necessary momentum to keep raising the price.

Recognition Criteria for a Hanging Man:

The Inverted Hammer and Shooting Star also look identical. The only difference between them is whether you’re in a downtrend or uptrend.

An Inverted Hammer is a bullish reversal candlestick.

A Shooting Star is a bearish reversal candlestick. 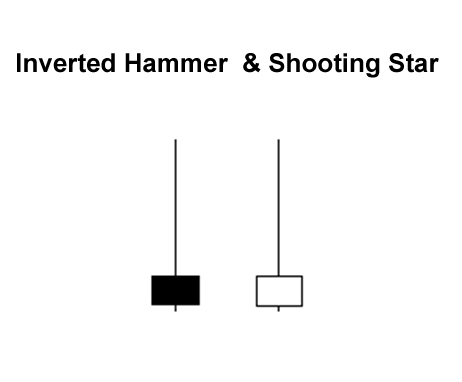 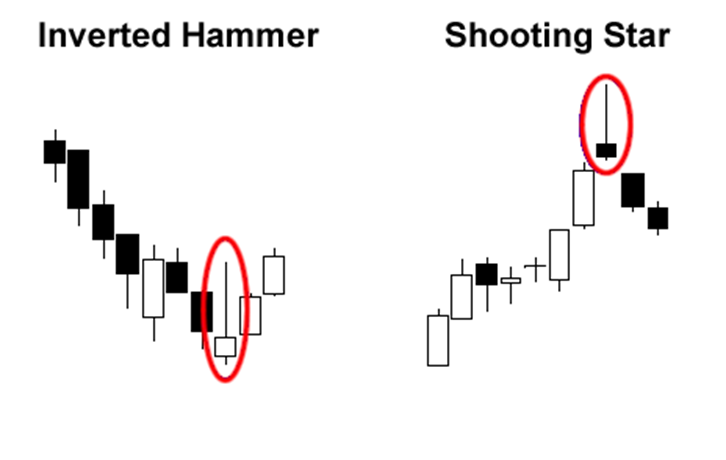 The Inverted Hammer occurs when the price has been falling suggests the possibility of a reversal. Its long upper shadow shows that buyers tried to bid the price higher.

However, sellers saw what the buyers were doing, said “Oh heck no!” and attempted to push the price back down.

Fortunately, the buyers had eaten enough of their Wheaties for breakfast and still managed to close the session near the open.

Since the sellers weren’t able to close the price any lower, this is a good indication that everybody who wants to sell has already sold.

And if there are no more sellers, who are left? Buyers.

The Shooting Star is a bearish reversal pattern that looks identical to the inverted hammer but occurs when the price has been rising.

Its shape indicates that the price opened at its low, rallied, but pulled back to the bottom.

This means that buyers attempted to push the price up, but sellers came in and overpowered them. This is a definite bearish sign since there are no more buyers left because they’ve all been overpowered.